Back to what he loves

Firefighter recovers from burn injuries, returns to family and work 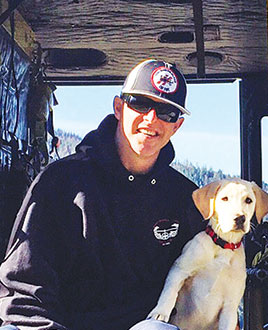 Firefighter Richard Reiff is back to work as a helitack firefighter following treatment for burn injuries at UC Davis. He is pictured with his dog, Boggs, named for his CAL FIRE base. Photo courtesy of the Reiff family

As wildfires ripped across Northern California late last summer, residents were forced to evacuate, leaving behind their homes and years of memories. As they fled, firefighters from all over the state rushed in to help battle the blazes.

One of those firefighters was CAL FIRE (California Department of Forestry and Fire Protection) firefighter Richard Reiff. He and his crew from the Boggs Mountain helitack team were the first to arrive at what is known as the Valley Fire, which eventually spread to more than 76,000 acres across Sonoma, Napa and Lake counties and destroyed nearly 2,000 structures, making it one of the worst in California's history.

The Boggs Mountain team is one of only 10 in California that deploys firefighters on helicopters to perform rescues and provide the initial attack on wildfires.

“Our job is to find the most active part of the fire and slow the spread of it before more resources can get on scene and assist,” Reiff said.

Shortly after stopping the spread of the fire to two homes, the crew split into two groups. Half of them, including Reiff, continued up the hillside to check on a large building. As they checked the perimeter, the fire suddenly took over. The crew was forced to deploy their emergency fire shelters, which look like foil cocoons, for protection until help arrived.

“We are trained to lay down flat on the ground with our feet to the fire, enclosing as much air into the shelter as possible, but the bare dirt appeared to be on fire and the ground was too hot,” Reiff said.

Once rescued, the four crew members were immediately flown to UC Davis Medical Center, where they were admitted and received treatment by physicians and nurses at the Firefighters Burn Institute Regional Burn Center. Reiff sustained severe burns to his face, hands and arms, which required surgery and a nearly month-long stay in the hospital.

“Every day the nurses would come into my room and thank me for my service,” Reiff said. “They thought I was a hero because I was out fighting the fires, but really the nurses at UC Davis are the heroes in my eyes.”

After being away from his family for 23 days, Reiff was released from the hospital. For weeks afterward, Reiff recuperated at home — treating his burns and exercising his arms. After two months, he was back on duty fighting fires.

“If it weren’t for the doctors and nurses at UC Davis, I don’t think I would have recovered as quickly as I did,” Reiff said. “All I could think about in the shelter was my wife and kids. I really didn’t think I’d ever see them again, so I am extremely grateful to not only be alive but to be healthy and back to work fighting fires.”